On leaving Logroño this morning, I saw for the first time an official representation of the female experience of walking the Camino, in the form of a dramatic statue by the city gates.

This was well timed, as I found myself repeatedly bumping into two different Heidis during the course of the day’s stretch from Viana to Navarette and it made me wonder whether there were any differences in our perspective of the experience.

Heidi 1 is a 71-year-old German widow and a two-time veteran of the Camino, while Heidi 2 is walking for the first time with her partner Bendt, from Denmark.

Neither thought that there were really any differences at all, but both agreed that it would have been highly unlikely that they’d have been able to tackle it until quite recently.

The medieval experience would have been almost exclusively male, from what I understand, but now it’s almost exactly 50:50.

I guess this demonstrates that modern-day equality means that women are now just as free to ruin their feet as the men are.

It was also good to catch up with Helen from Germany, who I last saw near Pamplona, who was now being accompanied by her mother.

One of the best aspects of walking in nature at an early hour is that you notice things that might’ve passed you by before – the horizontal ant trails that cut the path at frequent intervals, for one.

I’m doing my best to make sure that I don’t tread on the little creatures as they struggle on with a leaf or a bit of twig for their compost heaps.

This means looking up and down and around all the time, and I feel that I’m taking in so much more of my environment than before.

Before I started, I imagined that I’d be listening to podcasts as I walked. 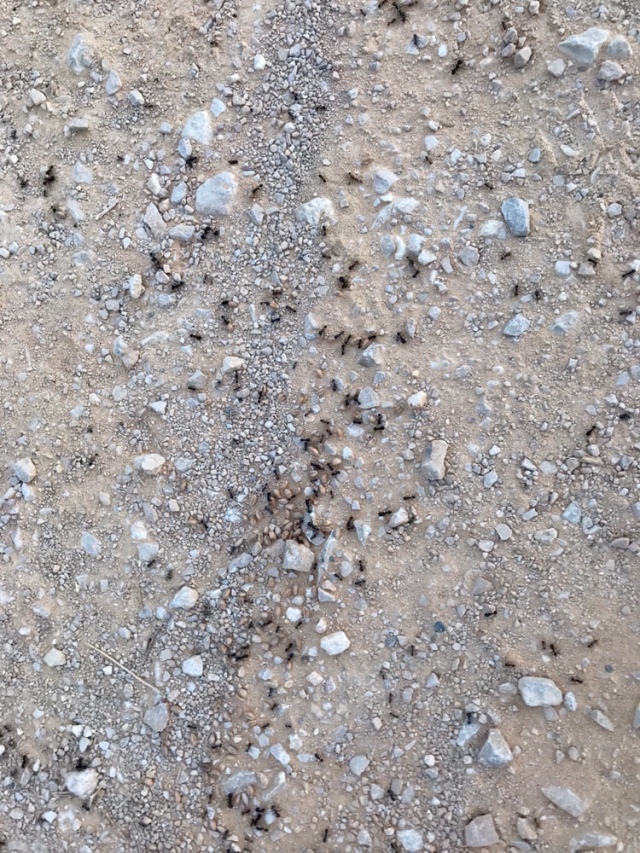 Today’s stage was quite straightforward and pleasant, with just a few elevated stretches, taking in the pretty capital of the Rioja district, Logroño, and its neighbouring park area.

My final destination today was Navarrete, a pretty little town that is home to an enormous church, featuring an incredible altar, dripping with ornate decoration.

You had to put in a Euro in order to see it properly.

That was revealing, in every sense.

After a 30km stretch, I had promised myself a little treat, so for the first time I had a room to myself and a shower of inordinate length at the Izar Albergue, which was pretty much the first one I encountered in Viana.

Left Foot has apparently developed a bit of a Compeed habit.

There were major howls of protest as I left Viana until two preventive patches were applied to the ball and heel, which were enough to satisfy the drug fiend and allow even strides to be made once again.

Two little ones have appeared on the top of each big toe, but they’re easily manageable.

Number of times “Buen Camino” was said: Way up today, at least 100, as Logroño was a very friendly place

5 thoughts on “The Other Half”