Having elected to cut inland away from the Camino da Costa to join the more widely traveled Camino Central, the first few miles of the second day’s walking took me on a succession of ordinary Portuguese roads for a long 10km stretch, with only a few visual treats to soothe the eyes. 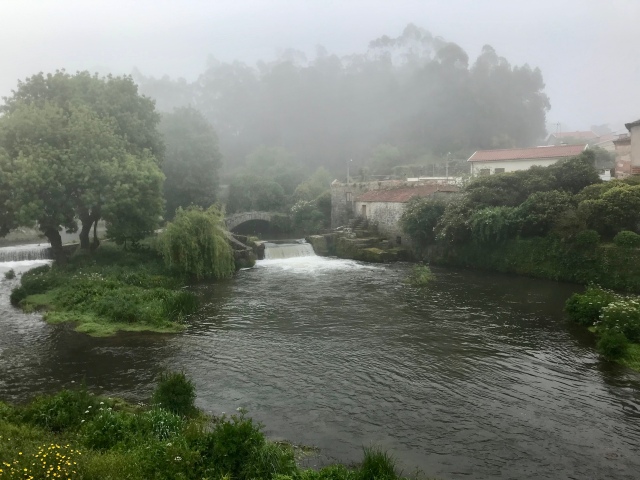 It was mundane, but at the same time, it was mildly alarming too, as Portuguese roads often fail to include such fripperies as pavements and Portuguese drivers almost entirely refuse to use their headlights even when conditions suggest that they really should.

It was another grey and foggy start to the day – those Spanish sunrises still had no challenges to their supremacy.

Again, it was a reasonably solitary stretch too, with my main human interaction coming from a wildly gesticulating scrapyard owner who wanted to make absolutely sure that I knew which direction to take as I passed by his empire, perhaps to mollify his cartoon cliche scrapyard dog who looked far less cheerful about my proximity.

Not long after that, I found myself alongside Richard and Mia from The Netherlands as we headed towards Rates, where a cafe offered the promise of more disappointing Portuguese food.

Richard and Mia were clearly toughened regulars, something demonstrated by Mia walking off ahead as Richard and I started to talk, showing absolutely no interest whatsoever in what her husband was probably about to say to me, as she’d no doubt have heard it a million times before.

I’m sure that you’re supposed to keep quiet about at least one of those things.

He also said that he and Mia had now walked 26 Caminos, including six on the Francés.

Some people I know think one is more than enough.

He also boldly dismissed Hape Kerkeling, the German comedian who popularised the Camino to a huge extent in Germany as a complete fraud who had never actually walked it himself.

That was a lot of information to take in all at once.

At Rates, we stopped for lunch and there I saw Jennifer and Meg again, as they were stopping there for the day, staying in the same albergue as Richard and Mia.

Here I finally had my first tolerable Portugués meal, a simple ham and cheese omelette.

Leaving my new friends behind, I pushed on alone on the second half of my 26km day, although I was beginning to feel my “end of day” pace coming on sooner than I expected.

I began to think more about the subtle differences between the Caminos that I’d detected so far.

There were fewer people, fewer albergues, fewer places to get refreshments and fewer demonstrations of Camino camaraderie – so far.

The absence of communal pilgrim dinners at the two places I’d stayed in so far might be a factor in that – true bonding often only comes when people break bread with each other.

On the other hand, the flies are the same.

I’d forgotten about the flies.

The last stretch into Barcelinhos and Barcelos was a little testing, despite a lovely chat with Hu and Ritskja from The Netherlands, but I wanted to get a hotel room to myself, to be sure of a good night’s sleep at last and these twin towns either side of the Cávado would surely offer a safe option. 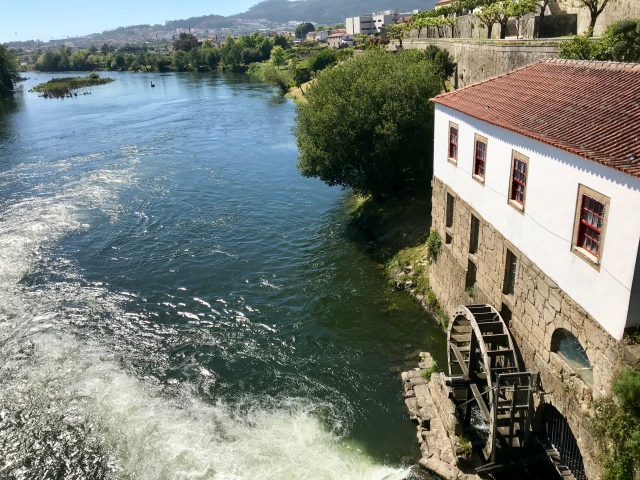 As it was, I might well have ended up securing the last hotel bed in Barcelos, arriving about thirty seconds before another Dutch couple who had guessed that I was French when we met earlier in the day.

I felt guilty for about ten seconds.

Rested and refreshed, I went in search of a sports bar to watch the Spurs v Ajax game, but the energy required to sit and watch it drained away almost as soon as the decisive Ajax goal went in.

The cold persists and has certainly weakened my tolerance for dorm living, hence my settling for a two person room.

Right Hip (a new character) decided to rebel and refuse to allow me to sleep on that side, leading to another fractured night’s sleep, making me doubt (in my sleep) of my ability to carry on.

Left Foot behaved itself though.

One thought on “From Vila do Conde to Barcelos”