As a child, I often found myself listening with some fascination to the Shipping Forecast on the BBC, a litany of unusual placenames from the seas surrounding the British Isles, hearing about visibility, temperatures and sea conditions in far off places.

Finisterre was one of those exotic locations and even though I did Latin for a whole two terms at school, I had never really noticed the simplicity of the name.

It was the End of the Earth – for medieval people, beyond here be dragons.

That sort of thing.

As such, Finisterre seemed like a highly appropriate place to bring my Camino to a symbolic end.

Still feeling a bit feeble after not eating very much since arrival in Santiago, the coach was the preferred option to cover the 90km that still lay between me and the Atlantic Ocean, so with a few of my Camino Compadres for company, I found myself on motorised transport for the first time in over a month.

That felt very weird, I can tell you.

Fisterra is the little town that lies at the heart of Cape Finisterre, packed full of bars and restaurants and souvenir shops.

Once the hotel had been sorted and a little lunch had been partially consumed, I walked the final 3km uphill to the 00km Camino marker for a valedictory photo.

For many Peregrinos, this place was the final step on their pilgrimage and with a ritual burning of their clothes and a dowsing in the sea, they would begin anew, fresh and clean, in salvation.

For me, another OJ was sufficient.

My clothes would certainly not be being burned either, not a chance.

Well, maybe one of the socks…

I settled down to absorb the last hours of the afternoon, in anticipation of a sunset and a full moonrise to follow. 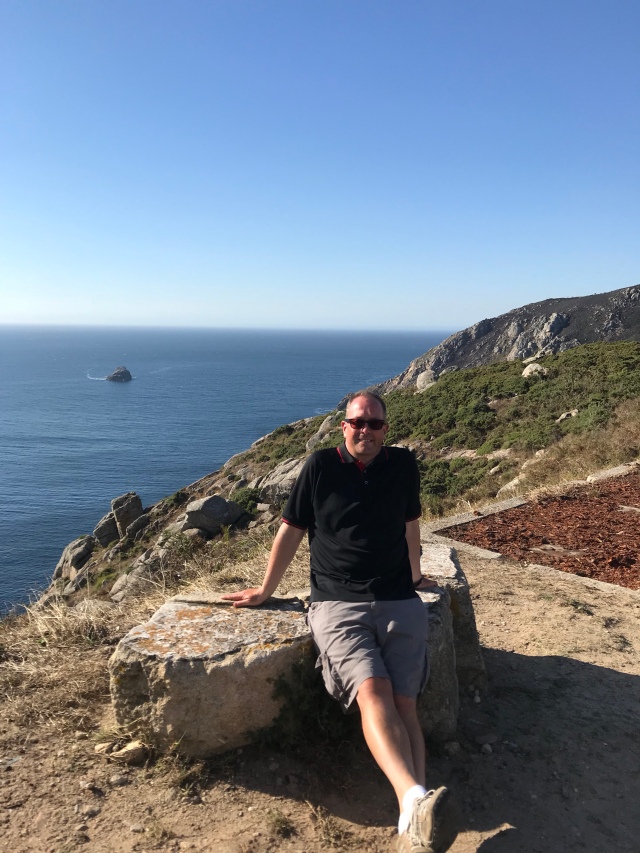 When the moment came, it was truly breathtaking.

Over the last few weeks, I have had the privilege to witness a fabulous series of Spanish sunrises, bringing with them the hope and promise of a new day.

But I’d seen far fewer sunsets – I’d probably been too busy chatting with people in the albergues.

The meaningfulness of this sunset was almost a surprise to me, as I suddenly felt a sense of completion, as the last fraction of the sun slipped beneath the horizon.

Now all that remained was to await the arrival of the Sun’s celestial dancing partner and within half an hour, the Moon rose majestically into the opposing sky.

Those who were there to witness these two transits will never forget the beauty painted on the heavens that night.

Little more could be added to the night, so it was time to wander back to Fisterra for a last vino tinto, but there was time for one more sweet moment, as Guillermo pulled up to me and my friends to offer us a lift down the hill.

One more Camino moment to add to a mountain of memories.